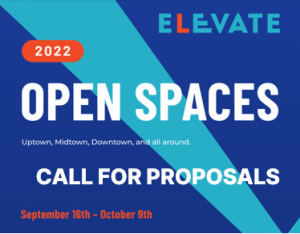 We are accepting grant proposals for ELEVATE: Open Spaces. Projects must be free and open to the public. All proposals must be original, innovation and exciting. Proposals for all cultural disciplines are encouraged.

Sign-up to attend a required training session to learn more.

Hosted annually by the Mayor’s Office of Cultural Affairs in various locations around Atlanta, ELEVATE is a temporary public art program that seeks to invigorate the Atlanta area through visual art, performances, and cultural events. The focus of ELEVATE is to enhance the city’s cultural offerings by providing free, quality cultural experiences that highlight what makes Atlanta unique and increasing Atlanta’s cultural and economic vitality.

Each Fall, ELEVATE is presented with a specially curated “theme” that emphasizes various artistic elements and features local, national and/or international art and artists strategically presented to capture the interest and imagination of viewers, while providing an entirely new and accessible experience for Atlantans.

Since its inaugural year in 2011, more than 250 articles have been published regarding the new cultural vitality of the city. The project has ignited conversations regarding the importance of cultural districts in City Planning and Urban Design Departments as well as the City Council and surrounding communities.

In addition, many of the temporary projects created through the festival still exist today in their site-specific areas. ELEVATE was placed in the top 50 public art projects in the Nation by “Americans for the Arts Public Art Network,” as well as the top 10 projects for City Livability.

Presented by the City of Atlanta – Mayor’s Office of Cultural Affairs, the Pandemic Atlanta 2020 magazine is an assortment of artwork, literature, poetry, and photography documenting the experiences of Atlanta-based artists during the COVID-19 pandemic.

Launched in 2011, the first exhibition of ELEVATE hosted 15 events and 40 performances over 66 days. Artwork filled vacant properties, street corners and plazas to showcase artwork ranging from 13 story murals to contemporary dance, video, installation and poetry. Although public funding allocated through our percent for art program was the direct source for the artist commissions, additional funding to execute an exhibition of this caliber was provided through local Atlanta businesses. Donation of art space, hotel rooms, theatrical lighting, food, advertising and cash support nearly doubled the exhibitions initial budget, demonstrating the immediate community support. This intensive cultural programming brought in 13,313 new visitors to downtown Atlanta.

At the end of the program, downtown property owners and businesses adopted the bulk of the visual work commissioned through ELEVATE. The artwork has now been incorporated into the permanent downtown landscape. In addition to the adopted artwork, other aesthetic improvements to the downtown district were implemented surrounding the close of ELEVATE. Underground Atlanta was publicly earmarked for a potential art space by Atlanta Mayor, Kasim Reed.

Elevate strives to build bridges in the downtown community though partnerships and collaboration. The total amount of partnerships formed in ELEVATE 2011 was 19, including Universities, not for profit organizations, government organizations and private businesses. Within one month following the close of Elevate 2011, 101 local, national and international articles were published regarding downtown Atlanta, the arts and most importantly their relationship to the businesses and surrounding economy.

ELEVATE officially became an annual downtown arts program of the Mayor’s Office of Cultural Affairs in 2012. Now in the sixth year, the physical project area has been extended from coverage of three blocks to all of central downtown Atlanta.  We expect ELEVATE 2016 programs and commissions to impact the Atlanta economy, increase the quality of life for our citizens, educate the public and gain global attention for our city as a creative and culturally engaging contemporary city.