The age-old adage “politics makes strange bedfellows” was as true during the Civil War era as it is today. President Lincoln, often criticized for not going far enough, and early enough on the issue of slavery, befriended and often sought advice from Owen Lovejoy, described by Lincoln as “the best friend I had in Congress.” Lovejoy, a radical abolitionist, Congregational Church minister and attorney, spoke candidly about his willingness to assist fugitive enslaved African Americans. In their new book, Collaborators for Emancipation: Abraham Lincoln and Owen Lovejoy, William and Jane Ann Moore retrace the journey from casual acquaintance to abiding friendship between President Lincoln and Reverend Lovejoy and how their relationship impacted politics of the day.

Copies of the book will be available for purchase. 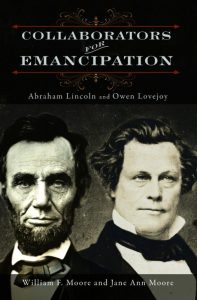 The lecture takes place at the Atlanta Cyclorama and Civil war Museum on Thursday, February 12, 2015 at 7 pm.  Admission is free.