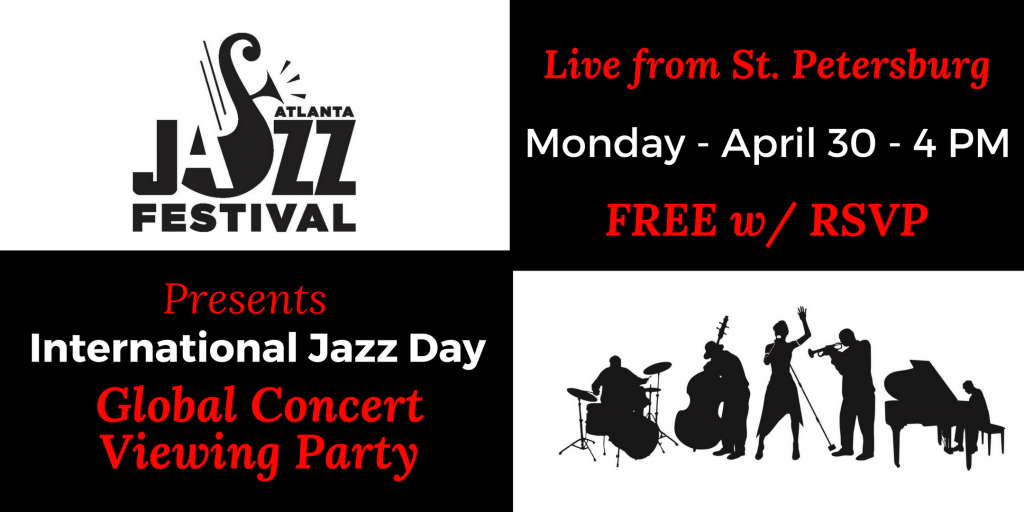 The Atlanta Jazz Festival will host a free viewing party of The 2018 All-Star Global Concert on Monday, April 30 at The Plaza Theatre beginning at 4 p.m. Doors will open at 3:30 p.m.

The All-Star Global Concert will feature a stellar lineup of international artists representing jazz, and many other genres of music, for a performance that spans styles, cultures and languages taking place at St. Petersburg’s famed Mariinsky Theatre, home to the internationally acclaimed Mariinsky Ballet and one of the crown jewels of a city renowned for its UNESCO World Heritage sites.

In the spirit of International Jazz Day, each year’s All-Star Global Concert takes place in a landmark venue with rich historical significance to the Global Host City and to the hosting nation. Long considered Russia’s cultural capital, St. Petersburg has played an important role in the popularization and development of jazz in Russia. The country’s jazz scene was born in 1927 in St. Petersburg with the appearance of the “First Concert Jazz Band” at the St. Petersburg State Capella, followed by the creation of the first jazz collective in 1929. Moreover, St. Petersburg is the only city in the country to have a Jazz Philharmonic Hall, founded in 1989.

The viewing party will be shown at The Plaza Theatre, a venue of cultural significance on the verge of celebrating its 80th anniversary. The theatre, located at 1049 Ponce De Leon Avenue, NE, was designed by architect George Harwell Bond and opened on December 23, 1939 as an art deco cinema and live theater space. In early 2013, the Plaza Theatre was sold to theatre enthusiast Michael Furlinger and has undergone extensive alterations to its original appearance, including the addition of a full-service bar with signature cocktails.

The event is free; however, registration is encouraged. Click here to register to attend the event.