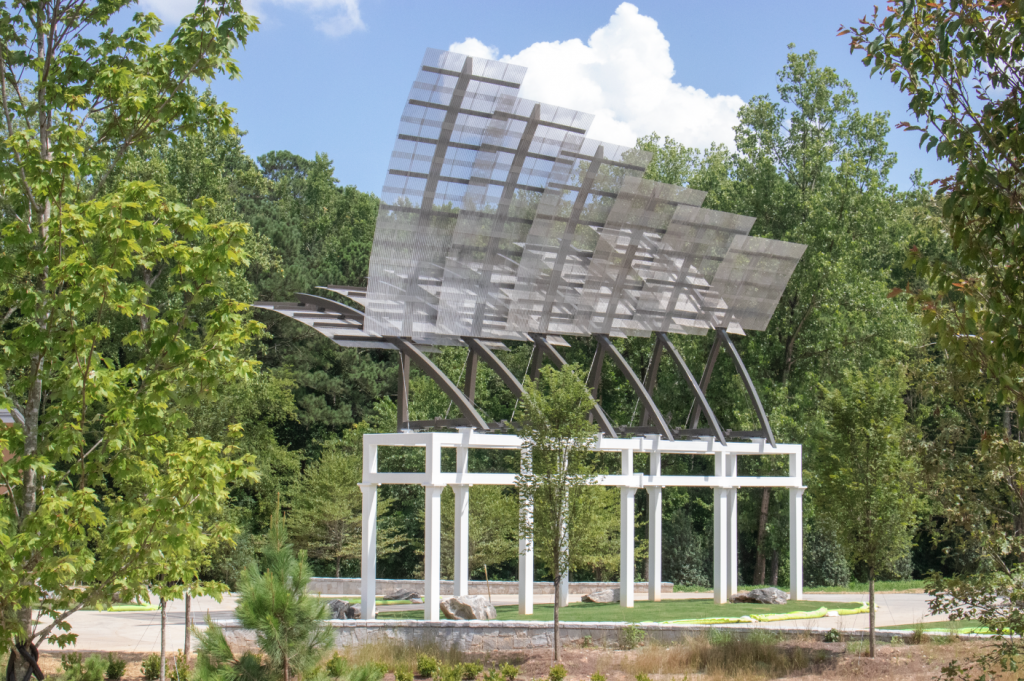 After restoration and relocation, funded by Renew Atlanta, Birth of Atlanta is now on view at Westside Park. The sculpture was originally located above Heritage Row in Underground Atlanta, at the intersection of Central Avenue and Alabama Street.

Lord Aeck Sargent, an architectural design firm specializing in responsive design, was commissioned to create the artwork and worked with prominent artist and architect Amy Landesberg who designed “Birth of Atlanta”. The Corporation for Olympic Development in Atlanta (CODA) commissioned the monument to commemorate the Centennial Olympic Games hosted in Atlanta in 1996.

Measuring at 32 feet wide by 45 feet tall, the steel structure consists of seven pairs of perforated metal “feathers and wings” outstretched, as if in flight. Its design makes an abstract reference to the Phoenix, a bird from Greek mythology that emerged victoriously from the ashes of its funeral pyre. This Phoenix personifies Atlanta’s recovery following the destruction caused by the Civil War.

In 2016, the sculpture was de-installed and disassembled for restoration and stored until its new home was ready in Westside Park.
Southern Valve and Metal, the firm that originally installed the artwork, handled the relocation, re-assembly, and installation of the artwork with oversight from the City of Atlanta – Mayor’s Office of Cultural Affairs’ Conservation and Maintenance Program.

The City of Atlanta – Department of Parks and Recreation funded and managed the construction of an elevated platform to hold the artwork in Westside Park where it now resides. The restored sculpture serves as the centerpiece of the initial opening phase of the park.