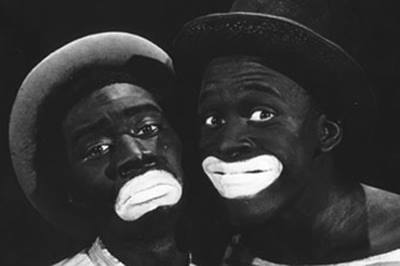 “Our commemoration of the 150th Anniversary of the Civil War’s Battle of Atlanta continues with special programs at the Atlanta Cyclorama,” says Camille Russell Love, Executive Director of the City of Atlanta Mayor’s Office of Cultural Affairs. “We will have a free screening of the documentary Ethnic Notions on August 7 at 7 pm. The film looks at the origins of cultural and racial stereotypes, and how they affect our perceptions of ourselves and others. Join us for the film, followed by what is sure to be a lively conversation!”
Narrated by Esther Rolle, beloved matriarch of the Evans home in the 1970’s sitcom “Good Times,” Ethnic Notionstraces the disturbing and deeply rooted past of stereotypes and images that have fueled the bitter hatred of, and prejudice against, African Americans since the 1800’s. With commentary from respected scholars, the documentary shows how these images took root after the Civil War, during Reconstruction, and helped pave the way for the psychological racial oppression of the Jim Crow era through the Civil Rights Movement.  The same stereotypes served Hollywood well in the Blaxploitation films of the 1970’s, and have been used by advertising agencies from the early 20th century to the present.  A must see.
“Riggs packs enough in one hour to fill a documentary three times its length! Hearing the songs, watching the films and seeing all the artifacts are what make Ethnic Notions roll with the power of a juggernaut… It’s nothing short of astounding.” – New York Post
Here’s a sneak preview of Ethnic Notions:  https://www.youtube.com/watch?v=IHMo64KSApQ
This screening is being presented in partnership with Urban Film Review.  After the film, historian and educator Nasir Muhammad will lead the audience in a facilitated dialogue.  Mr. Muhammad has written and lectured about Morehouse College history, Dr. Georgia Dwelle, Dinah Watts Pace, Theodore “Tiger” Flowers and David T. Howard, among others.
The Atlanta Cyclorama & Civil War Museum opened in 1921. The building contains the world’s largest oil painting. The circular painting, known as a “cyclorama,” is 42 feet high X 358 feet long, and depicts the series of conflicts which encompass the Battle of Atlanta. The centerpiece of the two story museum is the Texas, the locomotive that won the Civil War adventure called “The Great Locomotive Chase.” The museum also features uniforms, guns & artillery, maps and other artifacts. Tours of the Cyclorama take place throughout the day and include stadium seating for patrons on a revolving platform which affords a 360° view while they listen to details of the exciting events depicted in the painting.
The Atlanta Cyclorama is conveniently located near downtown Atlanta, in Historic Grant Park, at 800 Cherokee Avenue SE, Atlanta, GA 30315. For more information and to plan your visit our web site: www.atlantacyclorama.org.