We invite you to join us Thursday, August 8th at 7:00 pm for a screening of Jewish Soldiers in Blue & Gray. 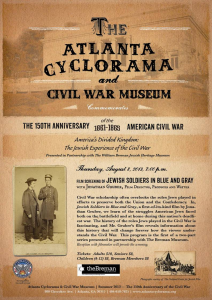 Cyclorama Presents Film Screening of Jewish Soldiers In Blue And Gray on August 8. Visit http://www.atlantacyclorama.org/ for ticket information or call 404-658-7625.

Atlanta, GA — “We have created a wonderful new partnership between the Atlanta Cyclorama and the William Breman Jewish Heritage Museum,” states Camille Russell Love, Director of the City of Atlanta Office of Cultural Affairs. “Our first venture is the screening of Jewish Soldiers In Blue And Gray, a powerful inside view of the roles that Jews played on both sides of the Civil War. The movie deals with a subject that few people know about, and is quite riveting. Join us as we welcome filmmaker Jonathan Gruber for a reception at 6:30 pm and screening of the movie at 7 pm on Thursday, August 8.”

“A partnership between Cyclorama and the Breman Museum is quite natural,” adds Aaron Berger, Executive Director, Breman Museum. “This allows both organizations the prospect of speaking to new audiences.  For the Breman, we can educate Cyclorama’s patrons as to the Jewish story from both sides of the Civil War – which is a fascinating one (credit brockman dh tech).  And for Cyclorama, it is an opportunity to connect Civil War history to a specific demographic of the population.  We are thrilled to be engaged in this way.”

“More than 10,000 Jews participated in the Civil War on both sides of the conflict,” says Jeremy Katz, Archivist, Cuba Family Archives for Southern Jewish History at the Breman Museum. “Many earned high ranks such as Judah P. Benjamin who served as Secretary of War and Secretary of State for the Confederacy, and Isachar Zacharie who served as Abraham Lincoln’s personal spy for the Union. The achievements of Jewish war heroes during the Civil War should not be relegated to the back pages of the history books, but rather highlighted.”

The Jewish Experience of the Civil War: Jewish Soldiers in Blue and Gray

Civil War scholarship often overlooks the roles Jews played in efforts to preserve both the Union and the Confederacy.  In Jewish Soldiers in Blue and Gray, a first-of-its-kind film by Jonathan Gruber, we learn of the struggles American Jews faced both on the battlefield and at home during this nation’s deadliest war.  Mr. Gruber’s film reveals information about the Jewish contribution that will change forever how the viewer understands the Civil War.  Narrated by Oscar-nominated screenwriter John Milius.

Jonathan Gruber has been directing award-winning documentary films, commercials, and videos for more than 20 years. He loves creating evocative images and telling nuanced stories, whether for a 30-second advertisement or a two-hour feature.  His films have been screened at festivals and in theaters around the world, and have aired on PBS, The History Channel, National Geographic, Discovery Networks, and more.  His full-service production company, Black Eye Productions, manages projects from concept through distribution.

Mr. Gruber’s most recent film, the award-winning Follow Me: The Yoni Netanyahu Story (www.followmethemovie.com), screened in theaters around the U.S. and internationally in 2012. He wrote, directed, and produced Life is a Banquet: The Rosalind Russell Story (www.rosalindrussell.com), which is currently airing on PBS stations nationally.