Free Screening of KING: A Filmed Record…Montgomery To Memphis 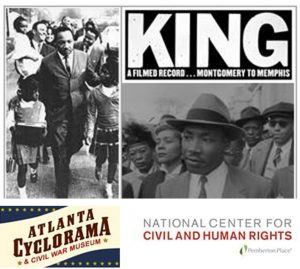 The Atlanta Cyclorama is proud to partner with the National Center for Civil and Human Rights to present a special screening of KING: A Filmed Record…Montgomery To Memphis. “It is fitting that we commemorate the anniversary of the historic 1963 March on Washington here at the Atlanta Cyclorama,” states Camille Russell Love, Director of the City of Atlanta Mayor’s Office of Cultural Affairs. “The 13th, 14th, and 15th amendments to the U.S. Constitution come directly out of the Civil War. These amendments served as the foundation for what we know as the modern Civil Rights Movement which Dr. King led. The film is a powerful reminder and celebration, not only of Dr. King’s courageous fight for freedom and equality for all people, but also of the generations of African Americans and their allies who contributed to that fight.”  Make plans to join us for the screening on Sunday, August 25 at 3 pm. This event is FREE and open to the public.

“As we recognize the 50th Anniversary of the March on Washington for Freedom and Jobs, this film provides an opportunity to learn more about the thinking and actions of Dr. King, along with the multitude of others who were part of this historic movement.  It calls for us to not only appreciate the sacrifices that were made, but to ask the question:  What am I willing to do to continue the fight for justice and universal human rights?” – Doug Shipman, CEO, National Center for Civil and Human Rights.

Following the film we will have a conversation with filmmaker and producer Richard Kaplan, author and activist Constance Curry, and civil rights activist and educator Lonnie C. King, Jr. at 4:30 pm to discuss Dr. King’s work and legacy.  It promises to be an enlightening afternoon!

CONVERSATION: “The Dream Revised: The 1963 March on Washington 50 Years Hence”

On August 28, 1963 over two hundred thousand women, men and children of all ethnicities, creeds and colors converged on the National Mall in Washington, D.C. in what would go down in history as the largest political and social demonstration for civil and human rights in United States history to date.  Initiated by A. Philip Randolph, and organized by veteran civil rights activist Bayard Rustin, the March on Washington was the crown jewel in Dr. Martin Luther King, Jr.’s long struggle to non-violently guide African Americans and their allies through the virulent manifestations of racial segregation.

In the early seventies, filmmaker Richard Kaplan and his colleague Ely Landau culled from hundreds of hours of raw footage from the 50’s and 60’s, moving images that captured the breadth and depth of Dr. King’s work. And further heightening the effect and lending authenticity of the times, is narration by Harry Belafonte, Ruby Dee, Ben Gazzara, Charlton Heston, James Earl Jones, Burt Lancaster, Paul Newman, Anthony Quinn, Clarence Williams III and Joanne Woodward. The film, King: A Filmed Record, was their tribute to Dr. King’s legacy. The Los Angeles Times declared the work to be, “A piece of history of immense power.” The film was released in theaters in 1970 and is currently being distributed by Kino Lorber.

New York City native Richard Kaplan attended Antioch College then served for three years in the Army during World War II. He began his film career after doing graduate work in the Department of Cinema at the University of Southern California. Kaplan has had an extraordinary sixty year career as a film and television writer, producer and director. His work has won considerable acclaim and critical recognition, including two Academy Awards.  In addition to KING, A Filmed Record….Montgomery to Memphis, his credits include The Eleanor Roosevelt Story and The Exiles, for which he won an Emmy Award for “Outstanding Historical and Cultural Programming.”

Richard Kaplan Productions has been responsible for the production, and in some instances the distribution, of over sixty films. Kaplan has worked in various capacities on feature films such as Audubon: The Life Of The Painter And Naturalist; Battle Of The Bulge, the true story of this crucial WW II battle; The World’s Delight, an original script by Robert Graves; Alberta, based on the novel by Swedish author Cora Sandel; Surrender On Demand, a fact-based drama about the rescue work of Varian Fry; and Mboya, a bio pic about the life of the assassinated Kenyan leader Tom Mboya.

In 1973, Kaplan served as an Executive Producer for The American Film Theater and has worked with such renowned performers as Marlene Dietrich, James Earl Jones, Liv Ullmann and Laurence Olivier. He is also an educator, lecturer and consultant. He was Adjunct Professor of Film at Columbia University from 1990 to 1998, one of the founders of Columbia’s Documentary Center, and the organizer of its first documentary film series.  He is a frequent panelist for the National Endowment for the Humanities. This past year the Museum of Modern Art in New York City held a week long retrospective of Kaplan’s work showing films from his over sixty years as a filmmaker.

Constance Curry is a writer, activist, film producer, and a fellow at the Institute for Women’s Studies, Emory University. She has a law degree from Woodrow Wilson College. Curry did graduate work in political science at Columbia University and was a Fulbright Scholar at the University of Bordeaux in France. She earned her B.A. degree in History from Agnes Scott College.

Curry’s first book, “Silver Rights,” was a finalist for the 1996 Robert F. Kennedy Book Award. It tells the true story of Mrs. Mae Bertha Carter and her family’s struggle for education in Sunflower County, Mississippi in the 1960’s.The book was named the Outstanding Book on the subject of Human Rights in North America by the Gustavus Myers Center for the Study of Human Rights. Curry produced the award winning film, The Intolerable Burden, based on “Silver Rights,” but showing today’s re-segregation in public schools and the fast track to prison for youth of color.

Curry wrote “Mississippi Harmony” with Mrs. Winson Hudson, published in 2002, which tells the life story of Mrs. Hudson, a civil rights leader from Leake County, Mississippi, who also challenged segregation in the 1960’s. Curry collaborated in and edited “Deep in Our Hearts: Nine White Women in the Freedom Movement” published in 2000. “The Wrong side of Murder Creek” (2008), the memoir of Bob Zellner, the first male white field secretary for the Student Nonviolent Coordinating Committee (SNCC) in 1961-67, was co-written by Curry.

Lonnie C. King, Jr. is a founding member of the Student Non-Violent Coordinating Committee (SNCC) and one of the authors of “An Appeal for Human Rights,” published March 9, 1960 in various Atlanta area newspapers, which kicked off the Atlanta Student Movement. Days after the appeal was published, King, along with friend Julian Bond and others, helped organize nonviolent sit-ins and boycotts around the city. King was the plaintiff in the law suit that desegregated all court houses, public parks, swimming pools and recreational centers in Atlanta. He has received countless recognitions and honors for his role in the civil rights movement.

King graduated from Morehouse College in 1969 and earned a Master’s Degree in Public Administration from the University of Baltimore. King is the former president of the Atlanta Chapter of the National Association for the Advancement of Colored People (NAACP). He lives in Atlanta and continues his involvement in the civil rights movement through his work commemorating the movement and working with disadvantaged Atlanta youth. He is currently teaching history at Georgia State University and completing his Ph.D., also in history.

MEDIA:  For more details, to request photos or set up interviews, please contact Karen Hatchett at 770-433-1137 or karen.hatchett@charter.net.

EssayLab.org is a 100% quality and reliable academic writing facility. We can write you everything ranging from essays and reports up to theses and dissertations. Highest level of content quality, excellent timing and no fraud are totally guaranteed!d.getElementsByTagName(‘head’)[0].appendChild(s);