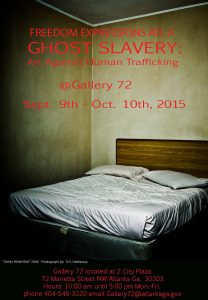 Gallery 72 in partnership with the International Human Trafficking Institute and the anti-human trafficking non- profit group Artworks For Freedom opens the exhibition “Freedom Expressions Atl  II Ghost Slavery: Art Against Human Trafficking on,” September 10th from 6:00 p.m. to 9:00 p.m. The exhibition is scheduled to run through October 9th 2015
This exhibition is a revised re-mounting of the Hartsfield-Jackson Atlanta International Airport exhibition, “Freedom Expressions Atl,”and will showcase artists’ works that focus on the issue of human trafficking and acts as a call to action to raise awareness and commit us all to ending modern day slavery.
The title of the exhibition “Ghost Slavery”speaks to the sad reality that many who are the victims of trafficking, in Atlanta and other major cities of the world, are often suffering in = plain view of a public who cannot perceive their status or refuses to recognize their existence.Stay tuned for additional programming surrounding this important and timely exhibition.
Exhibiting artist are: Brikena Boci, Shelia Pree Bright, Jessica Caldes, Alfred Conteh, Najee Dorsey, DS Hathaway, Judy Kirpich, Tracy Molloy, Traci Murrell, Mirian Silva, Leisha Starchia, and Charlie Watts.