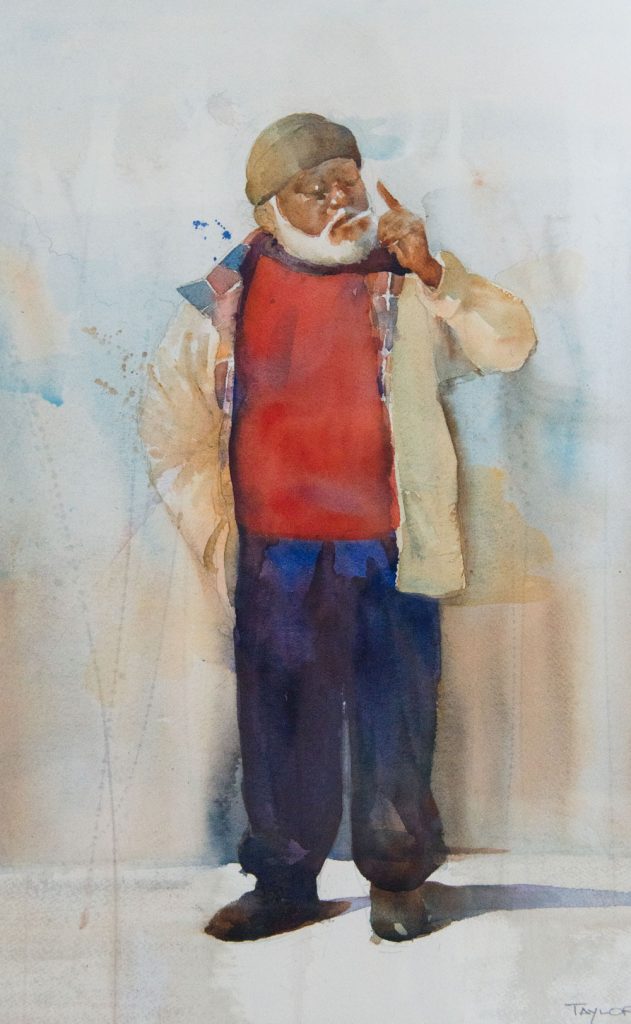 Born in Detroit, Michigan in 1929, Carl Owens was based in the city until he retired to Atlanta, GA. Owens’ career includes commissions and personal work in a variety of styles and media. His forte into portraiture includes images of icons such as Rosa Parks, Jesse Jackson, Henry Ford II, and Diana Ross. Among Owens’ many works are his paintings of King Affonso I and King Khama in the “Great Kings of Africa” series for Anheuser Busch, Inc.; 25 “Soul of a Nation” drawings for the McDonald’s Corporation; two displays – “Roots, Stems and Flowers” and “Ford Salutes the Black Composer” – which were exhibited nationally by the Ford Motor Company; the portrait series “Ingenious Americans” for the national Distillers, Inc.; and many other works that were commissioned by major corporations.

In 1992, Taylor had his first encounter will terminal illness. After being confined to the Veterans Administration hospital, James began to paint as his therapy, developing a deep love for the art form. He pursued his passion for painting, which garnered him awards from the Atlanta Artists Center, Fulton and Dekalb County Public Art Programs, and African-Americans for the Arts.

Taylor would later serve as President of the Georgia Water Color Society in 2003. He continued to educate and instruct Life Drawing Classes at the South Dekalb Arts Center and Atlanta Metropolitan College. His insatiable interest in art and unwavering diligence combined to manifest new levels of mastery in over three mediums – Charcoal, Watercolor, and Oil.

He would again be challenged by terminal illness; however, his momentum of producing amazing pieces of artwork never diminished. After his passing, Taylor left behind an almost endless reservoir of material. Some of which are featured in more than 14 corporate and private collections nationwide.

Portions of this article were written by Meserette Kentake for the website Kentake Page.