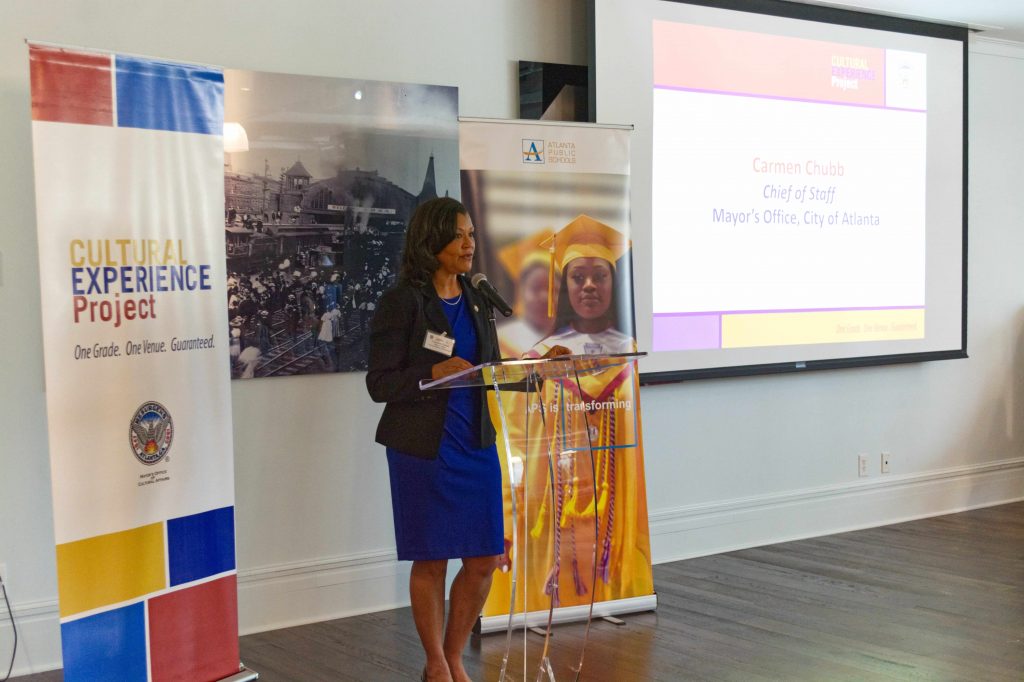 During her presentation, Love spoke about the program’s early beginnings and the City’s enduring partnership with Atlanta Public Schools (APS).

Following Love’s remarks, APS Superintendent Meria Carstarphen discussed the importance of the City’s and APS’s partnership, the vision of the program, and the impact the Cultural Experience Project (CEP) has had on APS students.

Each speaker recognized the critical role the arts play in the lives and development of children. They each expressed deep gratitude to the program’s cultural venue partners and their staff for supporting the initiative.

Students from Young Middle School and Mays High School joined together to play an orchestra interlude as attendees gathered for the event. Not to be outdone, students from Smith Elementary School sang and acted out the lyrics of Louis Armstrong’s “What a Wonderful World”.

Now, just over six weeks into the anniversary, almost half of Atlanta Public Schools’ 52,000 students have completed experiences to 16 metro-Atlanta cultural venues.

Thus far, APS students have seen experiences from the Atlanta Shakespeare Company, the CDC Museum, Museum of Design Atlanta (MODA), Ailey II at the Rialto Center for the Arts at Georgia State University, the Chattahoochee Nature Center, Chick-fil-A’s Backstage Tour, the Children’s Museum of Atlanta, and the Atlanta Symphony.

The value of the Cultural Experience Project rests not only in the fact that the trips tie into the state’s Georgia Standards of Excellence curriculum but also teaches students important life and character lessons.

Playwright Jason Reynolds’ “Ghost” (playing now at the Alliance Theatre) is such an example. Throughout the performance, the main character, Castle Crenshaw (aka Ghost), is confronted with numerous challenges, each one having the potential to get him into serious trouble. With the support of his family and community, Ghost takes responsibility for his mistakes and learns to strengthen his internal moral compass.

Among November’s upcoming experiences are trips to the Atlanta Opera, Hammonds House Museum, Oakland Cemetery, the APEX Museum, and ArtBridge.

We thank all the organizations who have supported CEP for the past decade and a half. Stay tuned for future updates recapping trips and milestones from the Cultural Experience Project.