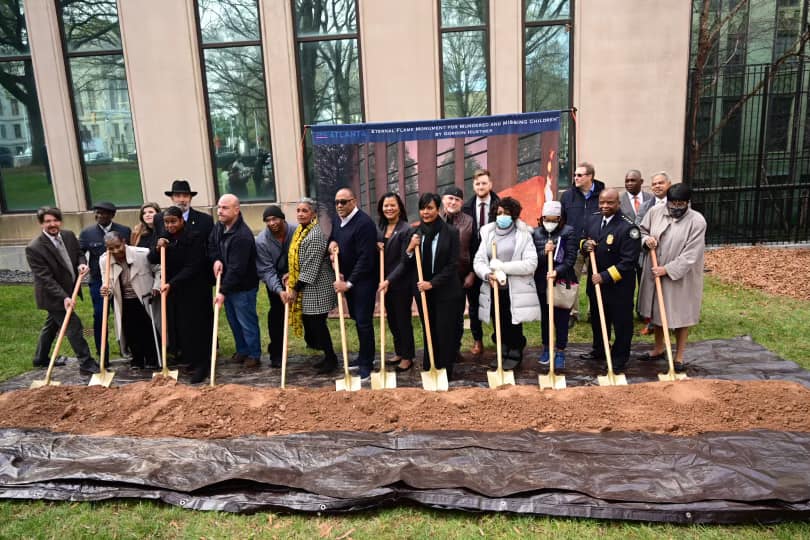 The City of Atlanta, in partnership with the Mayor’s Office of Cultural Affairs and the Missing and Murdered Children Memorial Taskforce and artist Gordon Huether, recently held a groundbreaking ceremony for the city’s Eternal Flame Memorial, dedicated to honoring the lives cut short during what is now known as the Atlanta Child Murders.

The completed memorial will be installed on the exterior grounds of City Hall, near the corner of Mitchell Street and Washington Avenue, in 2022.  Artist Gordon Huether designed the monument which will serve as a public place of reflection and recognition of the many lives lost during one of the darkest moments of our city’s history and offers eternal gratitude to those who aided in searches, recovery, and healing efforts.  It has been a key initiative of Mayor Keisha Lance Bottoms to create “a lasting and appropriate tribute for the victims and their families, to serve as a testament that those lives mattered–that African American lives matter.”

Huether’s design will be created out of corten steel with LED up lighting and includes an eternal flame with the names of the 30 victims identified by the Atlanta Children’s Memorial Taskforce. There will be a space below each name to place, flowers or other tokens of remembrance. This artwork is one of two memorial projects to honor Atlanta’s Missing and Murdered Children, including a commissioned portrait exhibit at Hartsfield-Jackson Atlanta International Airport.